The Dakar Rally kicks off in style The Dakar Rally kicked off on Sunday 5th January 2020 moving north from Jeddah to Al Wajh with both trucks kicking off. The start of the day kicked off with 144 motorcycles, 23 quads (four-wheeled motorcycles), 83 four-wheeled vehicles, 46 SSVs (small buggies), and 46 trucks. The two parts of the days racing consist of the first half 8km, followed by the second half 213km, which crosses a 19km paved road (neutral zone). The road surface begins with a winding road in the mountains, and small but soft dunes appear immediately. In the latter half of the day, it is a complicated section of navigation for the team. There were many stones buried in the sand and it was easy to cause punctures.

In this section, Car 1 hit a stone in the first half and suffered a puncture on the right front wheel, but then ran smoothly and finished 13th overall in the truck section. On the other hand, Car 2 was stuck in the dunes due to a problem with the centre differential lock, and it took about 30 minutes to escape, but finished safely in 19th place. Car 1 and Car 2 won the 1st and 2nd place in the 10 Litre class.

The Hino arrived at the Bivouac in Al Wajh at around 7:30pm to 8:00pm, with sunset. The mechanics who were waiting immediately started the inspection work.

The first day of the first Dakar Rally was fun, despite some trouble. The off-road races I usually participate in have a strong sprint element, while the Dakar Rally is a marathon. The difference is big and it is only the first time, but I will do my best. 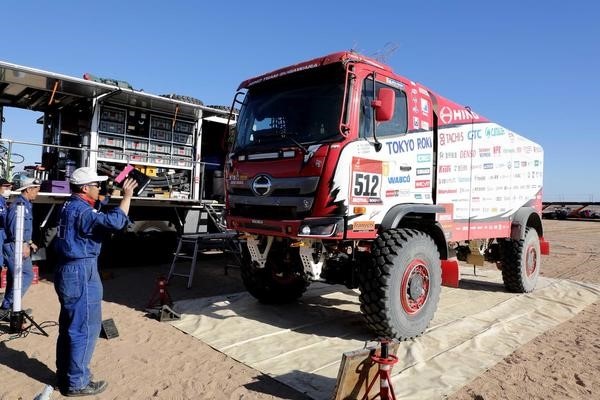 Car 1 Arrived on the first day

The day wasn’t a great one for the team - The road surface on this section is mainly a rough road but it changes variously such as a sandy area, a rocky area, a section going to the bottom of a dead river. The navigation was complex, and the navigator's load was high due to the fact that the road book was not delivered until just before the start.

Car 1, Teruhito Sugawara / Hirokazu Somemiya / Yuji Mochizuki, had a single puncture in the first half of the race and ended up finishing 15th overall in the truck category, accumulating 14th place to date.

On the other hand, Car 2 Ikuo Hanawa / Yudai Hanawa / Mayumi Maezuka stopped on the course due to a problem with the rear body of the car being damaged during the latter half of the SS (sports section).

The crew was safe but it was difficult to continue, and with the permission of the organiser, the teams support truck went to the scene. At 9.00pm local time on the 6th, Car 2 had still not arrived at the Bivouac in Neom, which is located on a plateau a few kilometres inland from the shore, the land resembles North Africa with high mountains rising in the distance. 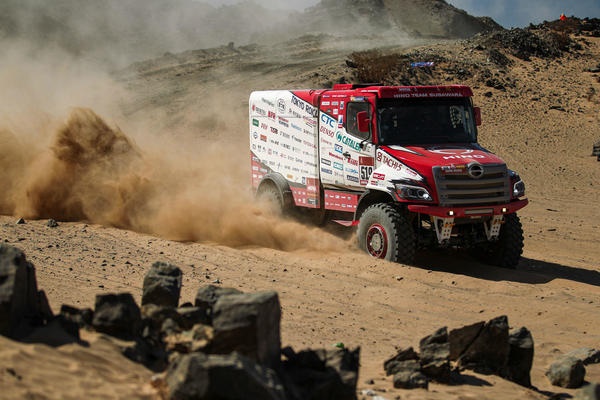 I'm not bothered by the fact that I can't get the road book until morning, but today navigation was difficult. I'm sorry that I made a little mistake at the end even though I came without any mistakes. I'll do my best tomorrow, too.

Stage 3 is a loop around Neom.